When you think of great players of the last 30 years, you might tend to overlook someone like Ellis Burks. However, with 18 fairly productive seasons under his belt, Ellis managed to hit .291 for his career and crank out over 350 home runs and 1200 rbi. His career was approaching it's end in 2001, but he still managed to hit .280 with 28 HR and 29 doubles. 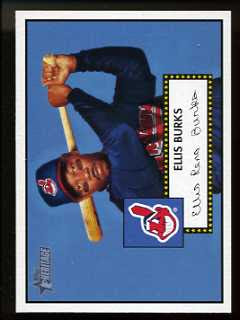 2001 Topps Heritage #84 represents the son of another great baseball player. Tony Armas Jr. followed a different path to the major leagues than his father, he found his way on the pitchers mound. Tony Jr. set a career high in 2001 for innings pitched with 196.2 IP and strikeouts with 176. 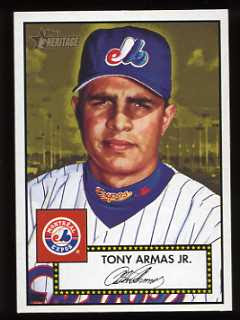 The 2001 Topps Heritage card of Johnny Damon would be his last Heritage card in a KC Royals uniform. Damon, under orders from superagent Scott Boras was set to test the free agent waters soon and thus forced KC's hand. He was trading before the 2001 season to Oakland and would continue a successful career, although his last year in Kansas City (2000) would mark his career high for hits (200), doubles (42), runs (136), AB (655), steals (46) and batting average (.327). Johnny would have a bit of a rough year in 2001 with Oakland, but would later bounce back with Boston and the NY Yankees. 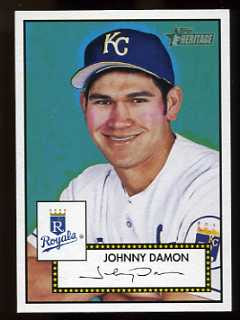 In a tragic twist of fate, 2001 would be Darryl Kile's last full season in baseball. He made the most of 2001 winning 16 games for the Cardinals which followed up a 20 win season in 2000. Darryl posted an ERA of 3.09 which was good for fifth best in the National League. 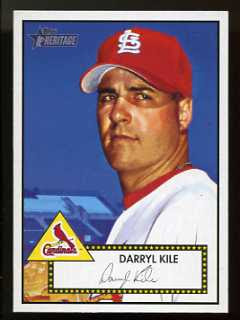 This is a pretty sweet looking Topps Heritage Bill Mazeroski card with an authentic piece of a stadium seat from the old Forbes Field in Pittsburgh. Bill played his entire career with the Pirates and was eventually voted into Baseball's Hall of Fame in 2001. Many fans remember Bill's dramatic home run in the bottom of the ninth inning to beat the Yankees and win the 1960 World Series. It was the first time a World Series had ever been won on what we now call a "walk-off" home run. The fan that caught the ball in the stands later traded it back to Mazeroski for two cases of beer! 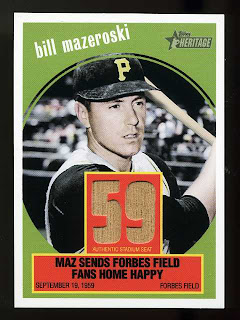 Vladimir Guerrero has long been one of the most feared hitters in baseball, and he did not disappoint in 2008. Vlad cranked out 27 home runs, 91 RBI and for over a .300 average for the 12th season in a row. The 2008 Topps Heritage Vladimir Guerrero card is the first card in the set. 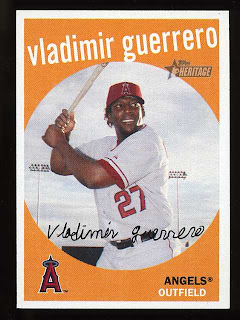 Daryle split the 2006 season between the Washington Nationals and the Atlanta Braves. His power numbers fell off, but he did have a career best (at the time) .308 batting average besides when he went 1 for 3 in his rookie season. 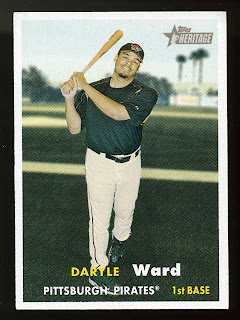 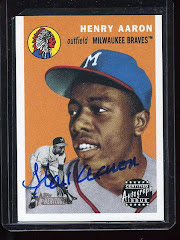 A beautiful autographed card of the Hall of Famer